February 25 we were in Montevideo, Uruguay for the day. We took a sight-seeing excursion around town and checked out the preparations for the upcoming presidential inauguration. Here’s a photo of the “Village People” working on scaffolding for the event. It looks more like they’re posing than working but what the heck.

Montevideo itself would probably not make the world’s top ten great cities to visit but it does have a certain charm. Uruguayans seem to be much more down-to-earth than their flashy Argentine neighbors. It’s the kind of place one would need to spend a bit more time in to get to know. And Uruguay itself would be a fascinating destination to give an idea of a South American laid-back lifestyle. Unfortunately, we were only in the capital city for a few hours so our visit necessarily was just a tasting.

The following are photos taken in Montevideo, mostly of Jay’s favorite model. 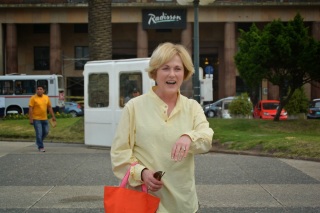