We took a day-trip from Budva, 40 minutes up the winding mountain road to the old Montenegrin capital city of Cetinje, a town of 14,000 that time seems to have forgotten. The old British, Russian and French embassies are still there, as well as structures from hundreds of years ago, but mostly the sleepy town is more of a village than anything else. It was a very peaceful place. The entry to the Budva bus station is quite entertaining. Right at the entrance to the station is a mini-wildlife enclosure, complete with peacocks and other birds, which makes you wonder if you’re in the right place to take a bus. 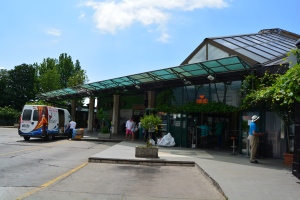 As we entered the station, a man with an official-looking identification badge asked if he could help us. As he directed us to the ticket window, he gave us an abbreviated story of his life, including his adventures as a merchant seaman and his visit to Portland while serving on a ship. He said his name was “Robert Kennedy” which he wrote on a brochure he gave us promoting a beachside restaurant where he said he worked as a cook. Our travel antennae always go up around bus stations but this guy seemed somewhat legitimate. He was helpful in giving us directions and a map of Kotor, our next major destination and, in any case, he didn’t appear to be expecting a tip.

While waiting for our bus, we met a very tall, thin young woman, also waiting for a bus. Her appearance reminded us of Olive Oyl from the old Popeye cartoons and she loved to talk. In the space of 15 minutes we learned she was Bosnian, lived in Kosovo, was married, was looking for work because things were tough in Kosovo, had just lost her hotel housekeeping job in Budva, and was now heading to Herzeg-Novi to look for work. She also frequently insisted that we write down her philosophy of life, which for the life of us we can’t remember because of the torrent of information she was giving us. At one point, she mentioned that perhaps she should go to America to be exhibited in a museum because she was so thin and that this was obviously something very unusual in our country. We enjoyed talking with her but we were glad when her bus arrived to take her to her next destination. We just couldn’t take any more data. Hopefully her next job will be one where she can capitalize on her verbal prodigiousity.

Our bus still had not arrived so we sat at a table to have a coke while two bus drivers were have a grand time drinking beer. When they ordered their second round, we looked at each other and agreed that if one of these guys turned out to be our driver we would pass on the ride. No fear, however, they were just off-duty and our bus soon came, complete with sober driver.