The ancient city of Petra, Jordan is one of those bucket list places that show up on virtually every travel junkies wish list. It’s in the same category as India’s Taj Mahal, Peru’s Macchu Picchu and Rome’s Coliseum. But like many people, we had no idea of Petra’s background or what it really was, besides seeing it in lots of travel photos and with Indiana Jones. And nothing prepared us for the experience of the 45-minute walk along the ancient roadway and through the weather-worn canyons culminating with the massive Treasury or Al Khazna that defines Petra. Fortunately, visitors to Petra can pick up a handy brochure describing the city and its highlights.

First, a little background on Petra. Although it’s not known exactly when the city was built, historians know that it was the capital of the Nabatean Empire during the period of the first century BC and that it was an important trading center. The Romans took over the city and it continued to prosper until a huge earthquake in 363 AD destroyed most of it. This led to a gradual downfall of the city until it was abandoned sometime during the middle of the seventh century. It was largely forgotten for the next 1,000 years and was known only to local Bedouins until a Swiss explorer, Johannes Burkhardt, “rediscoverd” Petra. It has attracted visitors ever since.

Today, there is a large, upscale visitors center where hundreds of people enter daily, many after getting off tour buses parked in lots nearby. After shelling out roughly $70 for the entrance ticket people begin the 2.7 mile trek, sometimes using donkeys or horse-drawn carriages, through the site. Meanwhile, sheep-herders go about their usual business. 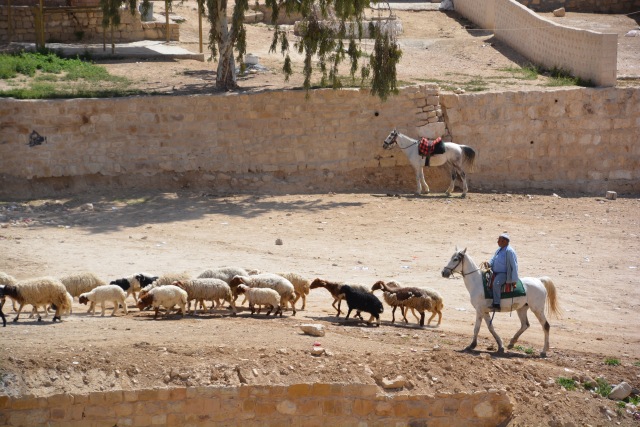 The road is rocky  but soon you reach the Bab Al Siq, or gateway to Petra, which is a series of tombs carved into the rock in the first century AD. 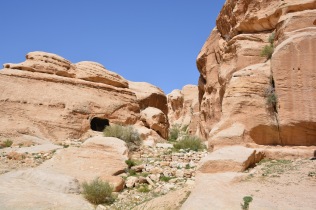 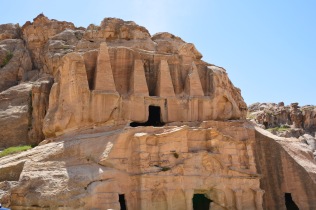 From there, you wind your way through the narrow gorge for one kilometer until, peeking through the gorge is the Treasury, or Al Khazna, the main attraction of Petra for most people. 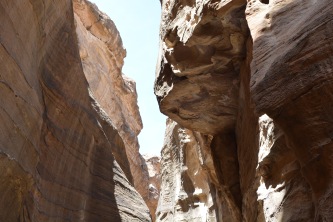 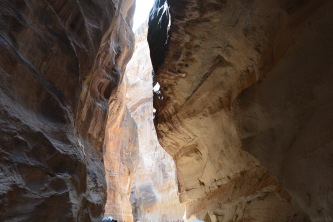 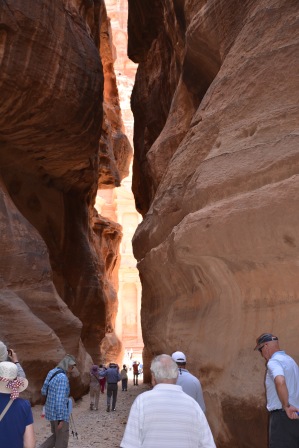 The Treasury isn’t really a treasury at all, but rather what is believed to be the tomb built for a Nabatean king in the first century AD. It got the name of “Treasury” because it was once thought to contain a king’s treasure. After watching the Indiana Jones movie featuring Petra, you would think the Treasury is the gateway to an ancient city but it’s not. Behind the gateway is simply the rest of the mountain the massive Treasury facade was carved from. Once you’re there, you can take a camel ride if you’d like. These guys seem to take all the crowds in stride. 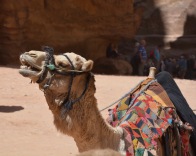 For many tourists, after seeing Al Khazna they start heading back to their tour buses. But for those who want more there’s still over a mile of walking. Along the way, there’s the Street of Facades, a row of Nabatean tombs carved into the mountain.

Finally, there’s the Theatre, carved into the rock, which could accommodate 4,000 spectators

There’s more to Petra than we’ve covered in this posting, but you get the idea. Here’s hoping it’s on your bucket list and that you get the chance to go there.