Casablanca. Ah, doesn’t this very name conjure up visions of intrigue and romance? Who can ever forget that torrid affair between Humphrey Bogart and Ingrid Bergman, “We’ll always have Paris”. Victor Laslow, the letters of transit, Sidney Greenstreet. These are the images of Casablanca that are forever embedded in our consciousness. And so it was that our intrepid duo went searching for that film-created fantasy in this famous northern Moroccan port.

Of course, much of “Casablanca” was shot indoors so it’s impossible to know what the real Casablanca should look like. Looking for “Rick’s”, based on its neon sign entrance in the film is hopeless. And, of course, there is, or was, no “real” Rick’s. All we were left with was the name and the story in “Casablanca”. In the end, the fantasy remained intact as today’s Casablanca has absolutely nothing to do with “rounding up the usual suspects” or “Here’s looking at you kid”.

What we did find, however, (it was hard to miss) was the Hassan II Mosque, either the third or second largest mosque in the world, depending on which tourist brochure you read. Built along the Casablanca waterfront, the mosque is truly huge, with a sprawling plaza that serves as a community meeting place for worshippers and residents. 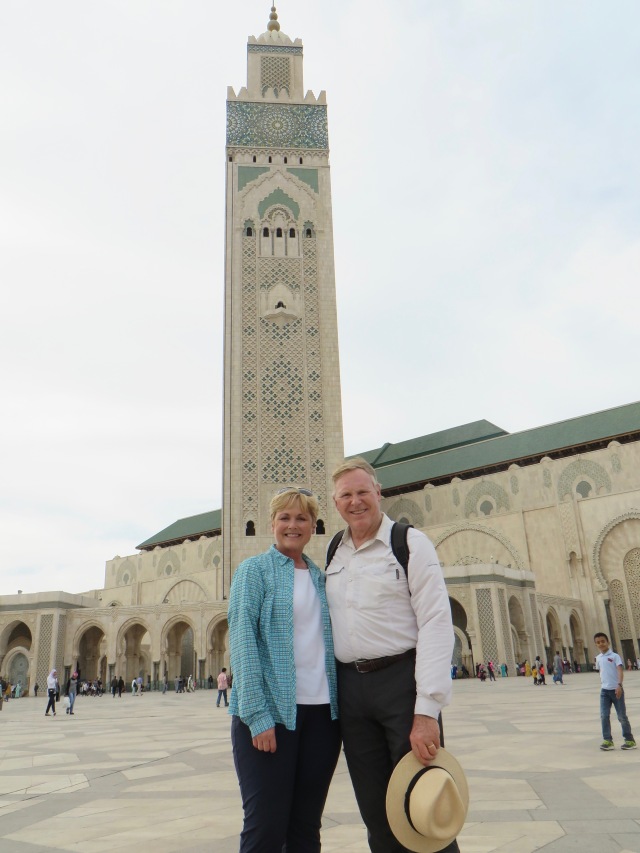 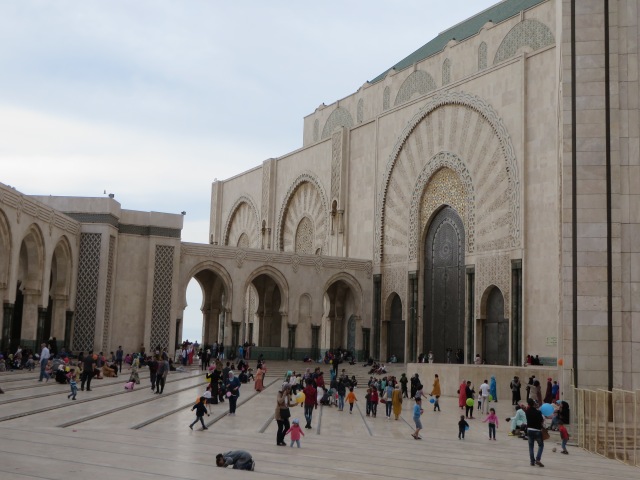 Outside the mosque, young boys race from the pavement, jump over a concrete barrier and dive head-first into the sea, bravely missing the rocks along the shore. This activity seems to be a sort of test of bravery among them as they laugh and cheer each other on. None of this would ever have appeared in Bogie’s film.

Not to be deterred in their search for cinematic inspiration, Tanya and Jay teamed up with another pair of travel maniacs we had recently met to find the Casbah. For some of us, the movie phrase, “Come with me to the Casbah” sticks in our heads but we have no idea where it comes from. For a bit of background, it’s from the 1938 film, “Algiers” where Charles Boyer’s character tries to entice the ingenue played by Hedy Lamar to join him at…..well you know where. The phrase was never actually used in the film but only in the trailer promoting it. But, more interestingly, Boyer’s character, Pepe le Moko, was the inspiration for Warner Brothers’ 1945 cartoon character, Pepe le Pew, a French-accented skunk who was forever looking for love and used the memorable phrase, “Come weez me to zee Casbah”. So, it’s actually Pepe le Pew (originally voiced by Mel Blanc) that we baby-boomers associate more with the phrase than we do with Charles Boyer. Incidentally, Mel Blanc was also the voice for Bugs Bunny, Daffy Duck, Porky Pig and lots of other cartoon characters, but we digress.

To find this “Casbah”, Jay, Tanya and our two new friends, Derk and Eugenia, took the Moroccan railways train from Casablanca to Rabat. The trip takes less than two hours and the train stops at several towns along the Moroccan coast before arriving at the capital. Using a zippy new mapping app Derk had downloaded on his iPhone, he guided us along as we explored the city from the train station. 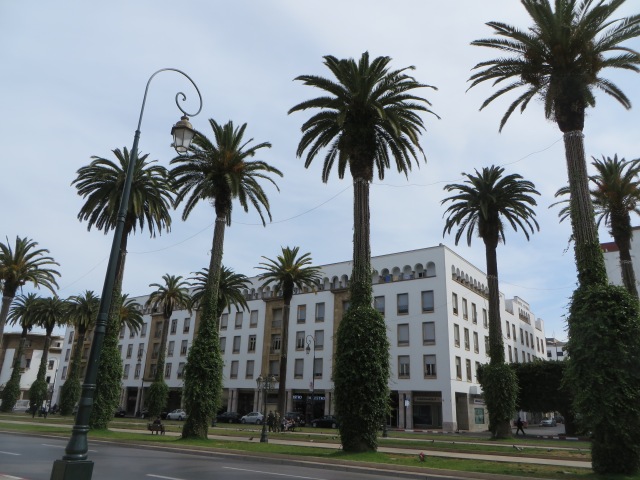 First along the way was the souk, where one can buy everything from cows’ hooves to belts. 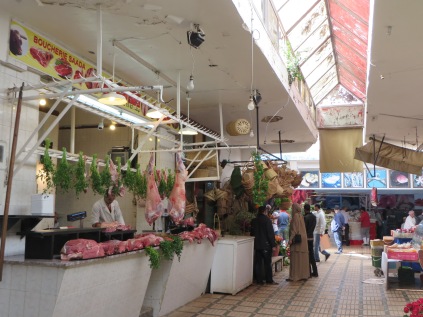 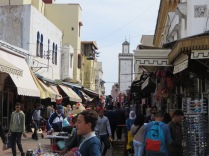 Winding our way through the narrow alleyways, we paused for lunch, freshly grilled lamb kababs served in a pita-style bun. At about 50c each, not bad. 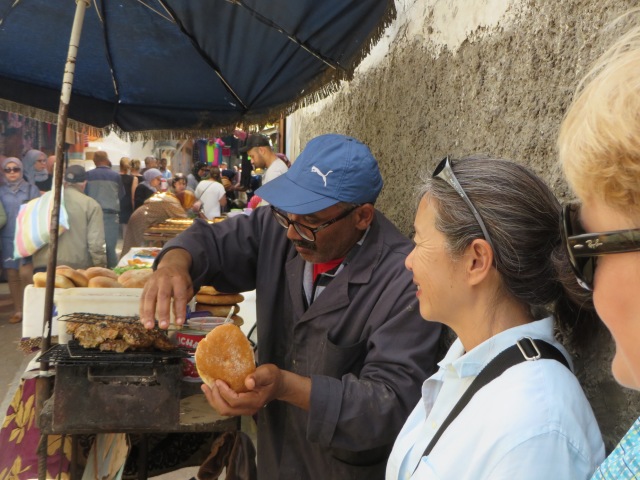 Derk assured us we were on the right track toward the Casbah, so we traveled on. Along the way, one of us asked, “What exactly is a Casbah”? Good question. A word search revealed that a “Casbah” is a northern African fortification, to include the neighborhood surrounding the fort itself. This becomes a critical point as we got nearer our destination because several self-appointed “tour guides” offered to help us negotiate our way through the many alleyways of the Casbah, lest we get lost, and insisting that the Casbah would close in one hour for prayers. We declined these offers and it was interesting that 30 minutes later, we heard other “guides” urging visitors to come with them because the Casbah would close in an hour. This, of course, turned out to be erroneous information because after all, how can an entire neighborhood close? Yes, there is an old fortress and yes, there are many small alleyways, but it was impossible to get lost, especially with an iPhone mapping app.

To be fair, there may have been afternoon prayers in a Casbah mosque nearby, but those are closed to non-Muslims anyway. 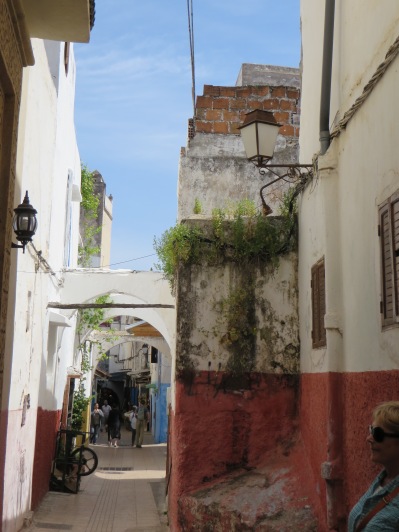 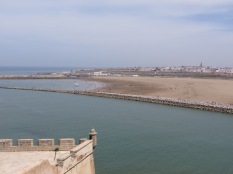 In the Charles Boyer film, the Casbah is a place where seedy characters and thieves hide out in its many labyrinths and it was undoubtedly why he was trying to get Hedy Lamar to join him there. But, as usual, Hollywood fantasy doesn’t always reflect reality. The only remotely seedy characters we found were the many “tour guides” and they were harmless. But forever we will have a new appreciation whenever we hear Pepe le Pew’s amorous plea to “Come weez me to ze Casbah”.