January found our restless duo in Portugal, in search of some warmer weather than in chilly Deutschland. While warmer than most of Europe during the first month of the year, Portugal still has its gray, rainy days and the temperature never got much over 60 degrees F.

But what their first stop, Porto, lacked in warmth it more than made up for in the sheer quantity of alcoholic beverage, namely port wine. The warehouses lining the banks of the Douro River hold literally tens of thousands of barrels of the sweet elixir and it is said that the area contains the highest concentration of alcoholic beverage per square meter than anywhere in the world. After our visit, that amount may have been diminished slightly.

How port came about at all is a fascinating story. Grapes had been grown and wine produced in the Douro Valley for over 2,000 years. The Greeks made wine, the Romans made wine and, of course the Portuguese produced wine. By the mid-12th century, wine was an important export for the Kingdom of Portugal and a mutual trading relationship grew between England and Portugal, often involving the sale of Portuguese wine for the import of salt cod. While the Portuguese wine then being exported from northern Portugal was okay, it was rather thin, with high tannin levels, and the English still greatly preferred imported French wine.

In the 17th century, France and England were engaged in not only military conflicts with each other but also trade wars. The French restricted the import of English goods into France. The English retaliated by imposing high tariffs on French wine. We can’t help but think of the current US president’s recent remark, “Trade wars are good. And easy to win.” Not sure if France or England came out on top but this particular trade war did end up benefitting English wine traders and Portugal.

English wine merchants started sourcing wine from the Douro Valley, shipping it down the river to Oporto and then up the Atlantic coast to England. The wine was better quality than what the English had previously experienced from Portugal but, unfortunately, the long sea trip often resulted in the wine that, frankly, tasted terrible by the time it got to England. The English then got the brilliant idea to fortify the wine before shipment by adding brandy to the barrels. This made the wine stronger and kept it from spoiling during the long trip north. With an alcohol content of about 20%, the new product, “port wine” became very popular with the Brits and a whole culture of pairing the red stuff with exotic cheeses, fine cigars and so on developed. Today’s port has brandy added during the fermentation process but the idea is the same. In the end, France and England stopped fighting but port has lived on.

Today, Porto is the second largest city in Portugal and is a much more workaday place than Lisbon. The weather is harsher, the skies often grayer and the place reminded Tanya and Jay of a larger version of Astoria, Oregon, including lots of seagulls. 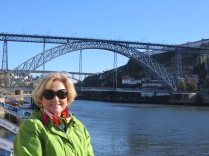