People from Portland often ask us, “Is it difficult to make new friends in Korea?” To which we have to answer that it can be just as easy as in Portland. Of course, the language barrier is always an issue, but people always face all kinds of communication challenges even when they’re both using the same native language.

One of the great advantages of living in a large city like Seoul is having the opportunity to meet people from other parts of the world. Even among Jay’s own work colleagues and associates at Samsung we have a Dane, an Australian, a Belgian, a German and a Guamanian, besides the miscellaneous Canadians, Americans and, of course, Koreans. Every one of them adds their own unique personality and, yes, quirkiness, to the mix.
Here’s a photo from dinner last night with a couple we met earlier this year; Nicole, who is the commerce officer at the German embassy, and her fiance Mohammed, who is originally from Yemen.

Here’s also a shot of a buddy Jay met this past winter on a weekend trip to the countryside. Not much of a conversationalist but a friendly enough guy. 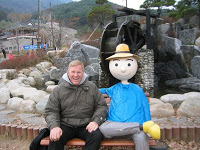