Lest our readers get the impression that Tanya and Jay just keep having one exciting adventure after another on this sometimes ridiculous four-month voyage, we’d like to bring you back to earth. Some travel days and destinations simply lend themselves to lesser degrees of excitement—such was last Tuesday in Guam.

Now Guam itself is actually a pretty cool place, or so we’ve heard. Some of our Korean friends enjoy vacationing there. Prior to this visit Jay and Tanya have each been here but only in transit on the way to somewhere else in the Pacific. So, we really can’t say we’ve ever had the total “Guam Experience”.

One of the good things about an insane around-the-world trip is that one gets to visit a lot of places. One of the not so good things is that you sometimes don’t have much time in any one place. Also, you are part of a group of over 1,000 people. Just the process of getting all these people through a Homeland Security onboard inspection and off the ship takes quite awhile. And, for us, who are pretty low on the “Mariner Star” loyalty level, it takes even longer. We were Group 20 out of 20, so we didn’t even get off the ship until nearly 11am.

Now, even though Guam may be a tourist destination for those coming by air, it’s not necessarily that for those arriving by ship. Apparently, only about three cruise ships visit Guam each year. Consequently, there is no cruise ship terminal and what ships do come here dock at the industrial port, about a 30 minute shuttle bus ride into the metro area.

The Guam visitor’s department wants to make sure everyone wins during these infrequent port visits so the bus heads directly to a big outlet mall where folks can visit the ever-popular Ross Dress For Less and try out the free mall WiFi. The only problem is that when you get hundreds of cruisers all trying to access the mall’s already slow WiFi system at the same time, one’s connection experience is somewhat less than optimal—as in practically nil.

By now it’s lunchtime and Tanya had the brilliant idea to try a nearby restaurant’s WiFi and get something to eat. Besides, we were getting close to the appointed time for Tanya’s monthly book club meeting, via Facetime. The nearest place was Ruby Tuesday’s, which turned out to be perfect. When the waitress told us that because today was Tuesday, beers were $1 all day, Jay was sold. Needless to say, a tall cool glass of Heineken on a hot Guam day is a very good thing. And, if one is good, two is even better. And so on. The result was Tanya had a great book club meeting and Jay was refreshed. It was now 2:30pm and we had to make the critical decision of whether to find a taxi for sightseeing or get back to the ship for our 4:30 departure. We opted for the latter and vowed that we’ll have a different Guam Experience another time. Heck, next time we might even stay overnight. 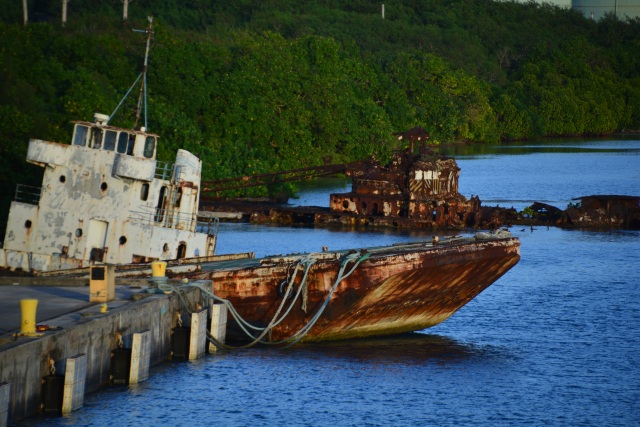