Jay and Tanya have become real experts in negotiating the Japanese rail system. Having encountered the ticket vending machines on past visits, we found figuring out the machines this time was like riding a bicycle—once learned, easily remembered. It also doesn’t hurt that most machines have and “English” button. Unfortunately, not this particular machine.

Early this week we took the JR to the ancient Japanese capital of Nara. From 710 to 784, Nara was the home to a succession of emperors and empresses and several sites in the area are UNESCO World Heritage sites. Nara is only a 30-40 minute train ride from the major port city of Osaka, so it was an easy day trip for our intrepid duo.

The city is a popular destination and we were pleased to see that even the locals sometimes have a hard time figuring out exactly where they are and where they’re going.

Along the main route to the many temples and shrines we ran into these guys putting on a spirited show of pounding the dough for really delicious soft and chewy rice cakes. Tanya can attest to their superb quality. 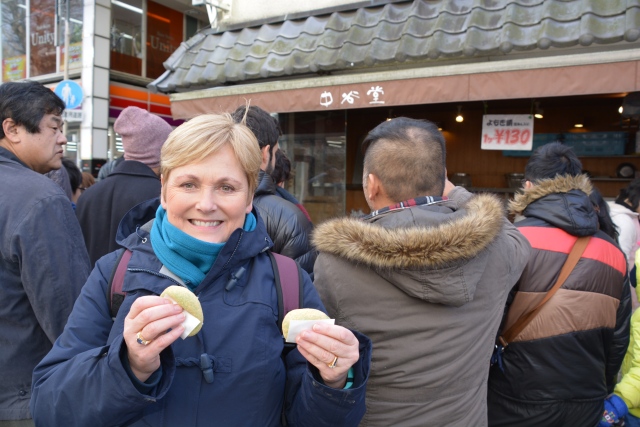 We also ran into this slightly creepy individual posing as a popular anime character. In a comic book it’s one thing, but on the street it’s a little scary.

Nara has often been described as “quintessentially Japanese”, providing for both the Japanese and foreigners an experience of what one imagines traditional Japan to be. Yes, there were crowds, but not overwhelmingly so on this winter Sunday.

Our first stop was the UNESCO World Heritage Site, Kohfukuji Temple with its 5-story pagoda. As we often experienced when we lived in Korea, groups of students will frequently look for native English speakers to interview as a class project. Jay and Tanya looked to be likely suspects and were happy to oblige. 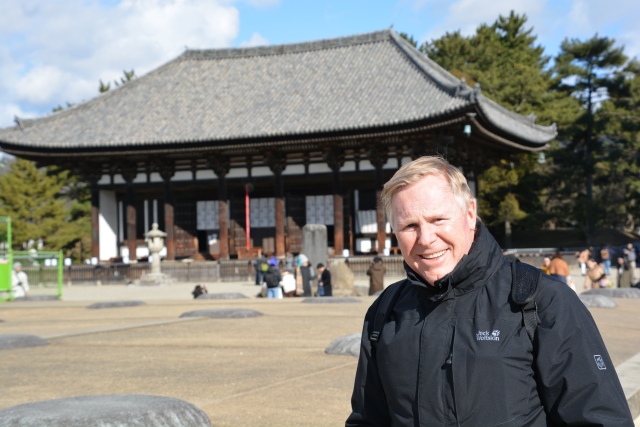 Throughout Nara Park, there are hundreds of deer wandering around and frequently mooching for food from visitors. According to legend, a powerful god riding a white deer was invited to visit the dominant aristocratic clan, the Fujiwaras, in the 8th century. Ever since then, the deer have multiplied and are protected as divine messengers. These guys have an excellent sense of smell and can tell if passers-by have any food in their pockets and they will go after it. 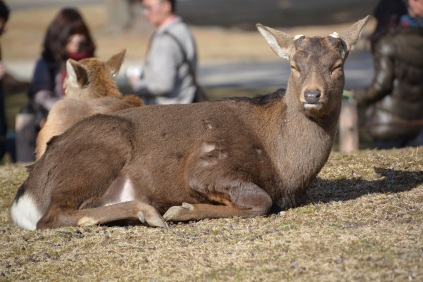 Todajii Temple is probably the biggest attraction at Nara. It is the largest wooden structure in the world and is the home for some massive Buddha statues.

Our final stop was the Kasuga Taisha Shrine. The roadway leading to the shrine is lined with over 2,000 stone lanterns, while the shrine itself is decorated with about 1,000 hanging bronze lanterns. 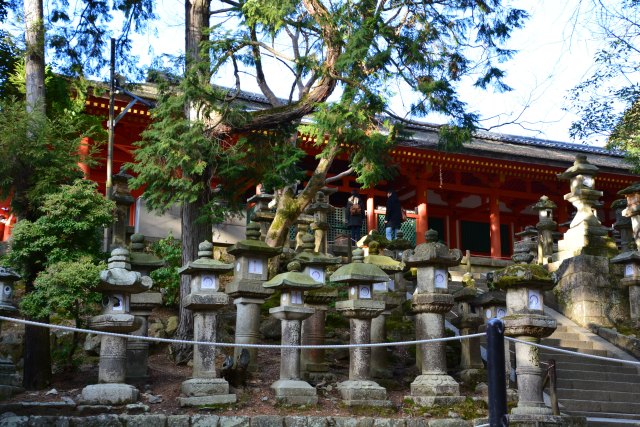