The pretty Japanese port city of Kagoshima is notable for its resident volcano, Sakurajima, and for the overall high level of geothermal activity in the area.

But on this sunny mid-February morning, Jay and Tanya decided to forego hiking around the volcano and instead take the JR local train to the resort town of Ibusuki to check out what else was hot. The train tracks skirt the beautiful shoreline for miles and we were able to experience a bit of rural Japan as the train stopped at little towns along the way. Schoolchildren, workers and housewives got on and off while the dapper, uniformed and white-gloved engineer got out of his compartment at each stop to check departing passengers’ tickets, giving a nodding bow and thank you to each one. How wonderfully civilized we both thought.

Arriving at the small Ibusuki train station, we checked with the helpful English-speaking lady at the visitor information desk who directed us to a taxi for the short ride to our destination for today—the Ibusuki Sand Baths. To explain, because of the underground volcanic and hot spring activity of the area, the sand along the beach here literally is steaming. To take advantage of this geological phenomenon, facilities for natural sand baths have been set up for decades. 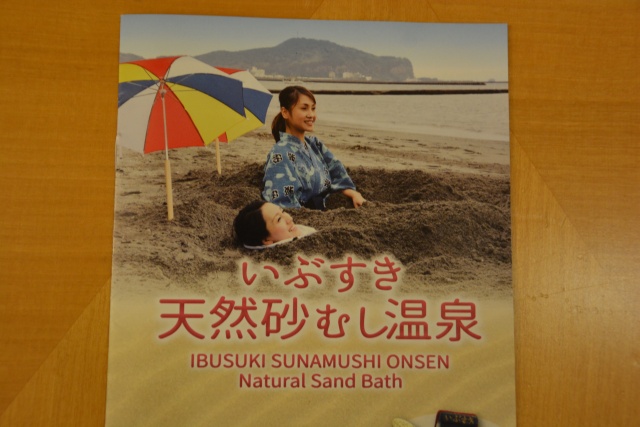 The actual sand bath experience is a little different than depicted by the brochure photo above, where two lovely ladies are enjoying the sand, next to the water under a colorful beach umbrella, but here’s how it went. Between the main coast road and the beach is a large modern multilevel facility—the Ibusuki Sunamushi Onsen.

After reading the sensible instructions posted, such as “You are not allowed to use the Sand Bath after consumption of alcoholic beverages”, and “Women are not allowed to use the Sand Bath during menstruation or while pregnant”, Tanya and Jay checked in at the front desk and received further instructions. We each received a lightweight cotton yukata, a full length kimono style robe, and were directed to our respective gender-specific dressing rooms. After changing into our robes, we met outside the building and made our way down to the beach to a large roofed open-air section of the beach where attendants directed us to where we should be buried in the hot sand. The facility looked like it could handle nearly one hundred customers but we joined about twenty or so fellow sand bathers this morning. After being told where to lie down in an already partially dug individual sand pit, an attendant draped a protective towel around the back of our necks and, while wearing our yukatas, two other guys with shovels proceeded to bury us in steaming hot sand until all that was showing was our heads. Wow! What a fun experience!

After about 20 minutes of sweating under a small mountain of sand, we looked over at each other and decided we’d had enough. After somewhat awkwardly getting ourselves up and getting all that damp sand off us, we headed back to the main building where it was time to shed our yukatas, get any remaining sand blasted off us in multi-jet shower stalls, get washed and scrubbed and soak in our large gender-specific baths. Jay is not sure exactly what the bath temperature was, but, being fed by underground hot springs, it was pretty darn hot. After a time of soaking, cooling and repeating, we both emerged refreshed and very relaxed before taking the return train ride back to Kagoshima. It was a day well spent.

Kagoshima occupies the southernmost part of the four main islands of Japan and has a rich history. Much of Japan’s early contact with the outside world was through Kagoshima, first with China and later with the West. But today, very few cruise ships visit Kagoshima and our visit was a pretty big highlight for the city. As we were preparing to depart, the local fire department band gave us a pier side concert and lots of local residents waved flags to wish us farewell. It was an emotional experience that encouraged us to come back to this beautiful part of Japan. 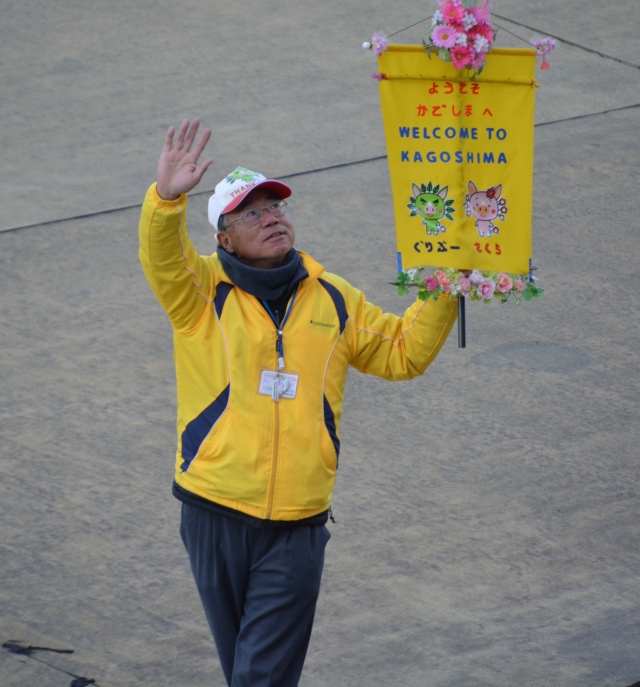 1 Response to Kagoshima and Ibusuki, Japan