Germans, and other northern Europeans, love vacationing in Mallorca and it’s easy to see why. Jay likes to compare the German affinity for the island to folks from the Pacific Northwest USA enjoying Hawaii. Mallorca is easily reached from several European airports and within a few hours northern Europeans can escape the sometimes bitter cold to relax in a mild and pleasant climate.

Mallorca is part of the Balearic Islands, which have been an autonomous region of Spain since 1980. The native language here is Catalan and there is a local Mallorqui dialect, but Spanish is the primary language used here, along with German, which is used when speaking to anyone who appears not to be from Mallorca. After all, the majority of foreign visitors are Germans.

The history of Mallorca, like much of Andalusia, on the Spanish mainland is filled with the continual battles and struggles for control between Christians and Muslims and the island was under Muslim control from roughly 902 to 1250. This back and forth conflict of cultures resulted in the often-seen juxtaposition of Islamic and Christian architecture, here seen in the Palma Catedral with its spire rising above Moorish-style arches. 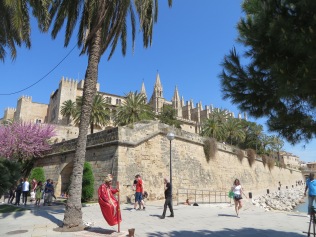 On Tanya and Jay’s last visit to the island, we explored the northwest part of the island, riding the rails in an antique wooden train car to the city of Soller. This time we spent our day exploring the capital city of Palma. What we found were beautiful city parks and fountains, gardens and people enjoying the laid-back atmosphere. We even noticed a bit of Gaudi-inspired features on downtown buildings. After a day in Palma, it’s easy to see why Mallorca is such a popular destination. 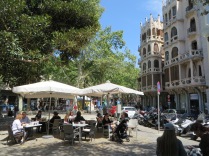