Under the Radar Destination: Alzey

Posted on October 1, 2015 by jayandtanya

There has been a lot of discussion in travel blogs lately about how over-crowded popular destinations have become and how this has degraded the travel experience. We talked about this in an earlier posting: https://neverlefthome.com/2015/05/07/crowds-and-travel-now-and-future/

It’s true that the savvy traveler must now be pretty clever to figure out what time of day is best to visit the Louvre, for example, or when to scale the walls of old-town Dubrovnik without the body crush of other travelers. It has been suggested that some A-list destinations, like Venice, must impose limits on the sheer numbers of visitors just in order to function at all.

But we’ve always been a sucker for out-of-the-way places, those places that are under the tourist radar. These might be smaller areas of well-known destinations, but more often these are the towns that are not usually mentioned in guidebooks and will never be visited on a typical two-week group tour. These destinations are usually judged as being too small, too boring or too culturally insignificant to warrant taking time out of a busy vacation. But practically every place on this planet has something to offer the traveler. These may not even be classified as B or C destinations. They might even be Z-class, but there’s always something there to kindle our imagination, to make us wonder and to enrich us. We’ve decided to call these places UNRADs.

Alzey, an old German town of 18,000, in the state of Rheinland-Pfalz is definitely an UNRAD. On Jay’s visit this week, there were virtually no tourists, with the exception of a walking tour of retired Germans. The tourist information center has one person in the office and she was excited to have him as a customer, probably the only one she would have all day. She gave him a little city walking tour map and guide, in English, and sent him on his way with a smile.

Alzey is a 40-minute drive south of Wiesbaden, easily accessed via autobahn. It’s one of those medieval German towns that’s cute, but not that cute, not in the Rothenburg ob der Tauber cute category.

But this town definitely has a history. It was founded in 233 AD as a Roman settlement and during the middle ages, it served as an administrative center for the surrounding area. Some of the medieval town’s walls still stand. 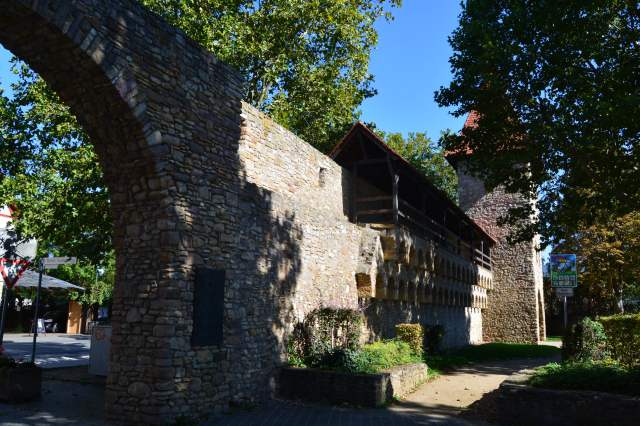 The “witches’ tower” is near the heart of town and is, of course, where the resident medieval witches were housed until properly disposed of.

The former horse market once operated in the town center and is surrounded by 17th century half-timbered houses.

Alzey is really a sweet little place and one gets the impression that despite the relative calm of the main town, there’s a lot going on. There are lots of families and young people around, as well as older folks, like these hobby artists honing their watercolor chops downtown.

Alzey, a relaxing UNRAD in Rheinland-Pfalz.