Zell: Tales of the Black Cat and the Wine Queen

Zell is one of those picture-perfect wine towns nestled along the banks of the Mosel River in Germany’s Rheinland-Pfalz.

Jay especially remembers Zell from his days at the University of Oregon where he was introduced to the city’s primary product, Zeller Schwarze Katz, or Zell’s Black Cat, by a guy in his freshman dorm. The name is given to virtually all of the wine produced here and one can’t go a block without seeing the ubiquitous black cat with his back arched, or more often, smiling and hoisting a glass of riesling in its hand (paw). 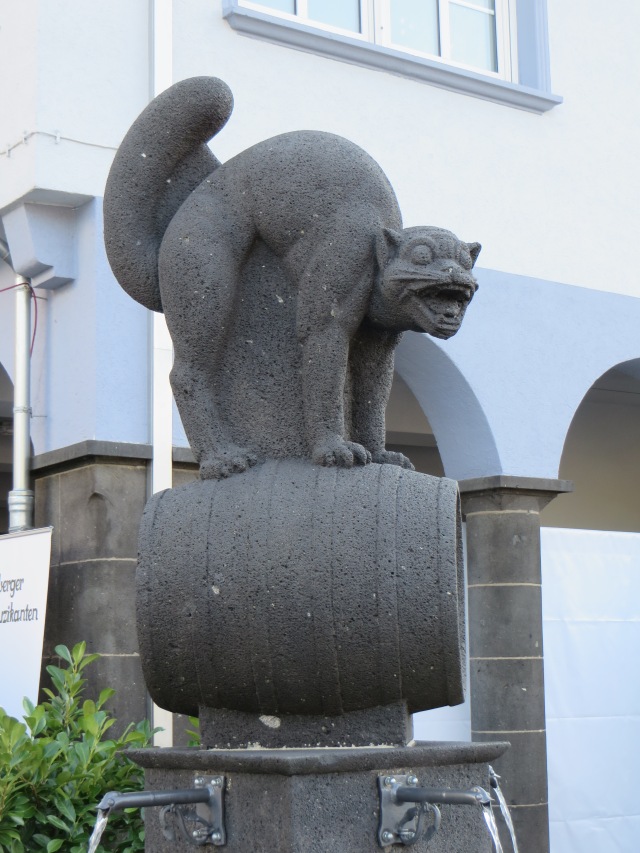 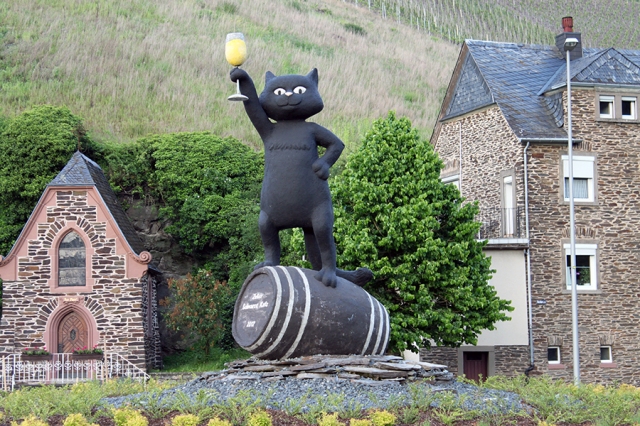 One thing is for sure, the people of Zell are always up for a party and this past weekend, Oct 9-11, Zellers were out in force celebrating their Federweißenfest, or celebration of the season’s new wine, which at this point is really nothing more than pressed grape juice with a small alcoholic content. Nonetheless, it’s reason enough to have a party.

Because one cannot get away from seeing images of the black cat everywhere in Zell, we had to get the real story behind it. Turns out that in the fall of 1863, three wine merchants from Aachen were in Zell negotiating for wine to bring back home. The merchants were in the cellar of wine-maker Peter Mayntzer, and after several tastings, could not agree on which of three barrels of wine to buy. At some point, according to legend, Mayntzer’s black cat jumped onto one of the barrels, hissing and “defending” the barrel from any would-be aggressors.

The merchants immediately took this as a sign, bought the barrel without tasting and brought it back to Aachen where they bottled and labeled it with a picture of a black cat with arching back. The wine proved to be so popular that the merchants returned the following year for more of the “black cat” wine and from that time on Zeller Schwarze Katz has been synonymous with the wine grown in this region. The name has now been trademarked by the town and is just as vigorously defended as was the barrel by its namesake.

Zell, like many other towns along the Mosel, has its local wine queen. Three years ago, we visited Zell with friends and met the then reigning wine queen, nineteen- year-old Queen Judith Hallenbach, at her family’s winery.

Judith, when she was Zell’s wine princess at age 16 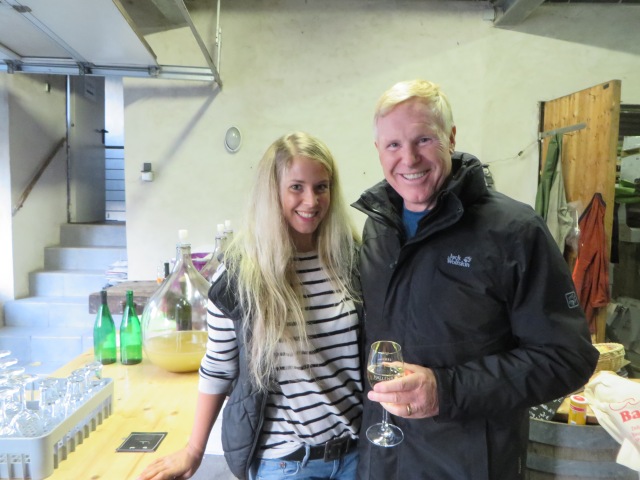 We caught up with Judith again this weekend to learn more about her family’s operation and what’s in store for the wine queen who no longer wears the crown. Judith is now 22 and lives with her boyfriend in an apartment within the family’s house right along the main entry street to Zell. She attends university in nearby Trier, studies economics, and intends to continue working with her parents and brother in running the family business. She explained how the family has gradually increased their vineyard holdings and now has vines in several locations in the vicinity, including vines just below the famous Zeller Schwarze Katz sign along the hillside.

The hills are so steep in the valley that it is impossible to use mechanical means to pick the grapes. Judith explained that they have a regular crew of about nine Polish seasonal workers who come every harvest-time to pick the grapes. For the picking season, the workers become like family. They stay in quarters behind the main family residence and are fed and cared for until the work is done. The leader of the crew has become a full-time employee and organizes the harvesting operation. For Queen Judith, she sees her future in Zell, working with her family and continuing the Hallenbach wine operation. Not a bad gig. 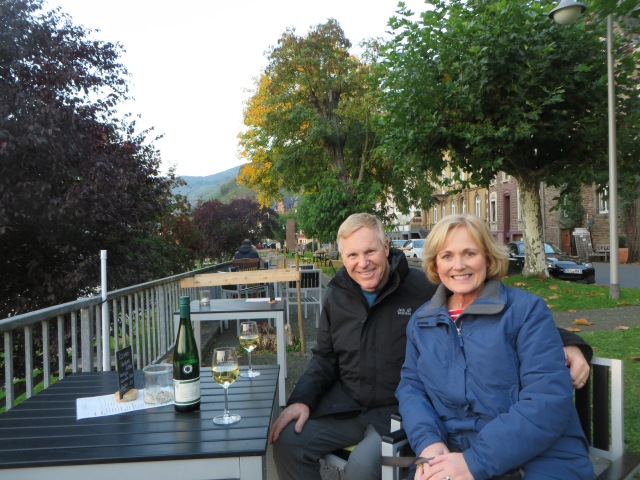 5 Responses to Zell: Tales of the Black Cat and the Wine Queen